Since I moved to London last year I’ve been waiting to see the Oxford Street Christmas lights being switched on. I didn’t make it last year so I was really looking forward to going this year. Honestly, I’ve been counting down for weeks.

On Sunday me and Cem went to see the lights being switched on by Craig David. We could just about see on a screen near where we were standing that there were performances from Louisa Johnson and The Vamps. I wasn’t too fussed about either of these performances seeing asI’m not a fan. Sadiq Khan made an appearance though, as you can just about see from the screen we were stood next to. 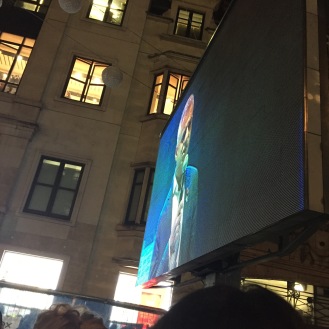 Although the lights were supposed to be turned on by 6:15pm we waited a good 45 minutes to see them, but they didn’t disappoint once they were finally turned on. However, we did stand shaking in the cold because neither of use thought to bring a hat or gloves. In our defence, we didn’t think we were going to be stood still for that long. We joined in with the 10 second countdown and watched the street light up above our heads.

We were stood right outside Oxford Circus tube station because we thought we were going to be late so didn’t want to spend ages trying to find a good spot to see the lights when we could see quite well from where we were already standing. There was a lot of pushing and shoving involved from people who were determined to get the first pictures of the lights but we could still see them all perfectly. 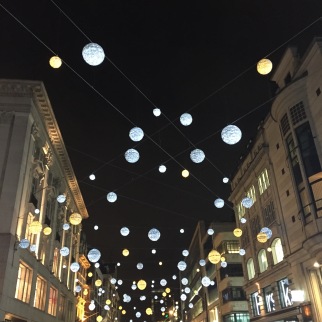 After looking at the before and after photos of the lights, Oxford Street just doesn’t look right when they’re turned off. I didn’t realise just how much of a different a few lights could make to a street.

When the crowd started to disperse I decided I really wanted to try one of the Costa Christmas drinks. Having seen the queues of people also lining up to try the drinks, I decided to leave it for another day…

UPDATE: I tried the Lindt hot chocolate today and it was amazing.

As always, thanks for reading!